Thank you for your support of the new community gathering space at Latham Square Plaza! Scroll down to sign our petition if you haven’t already.

Latham Square Final Decision on January 7 – Be There!

On the evening of January 7, the City Council will be deciding on the permanent fate of the 1500 block of Telegraph. Please mark your calendars for January 7 and come speak out for a pedestrian-friendly Latham Square that evening at City Hall!

Thanks to your support, the Rules Committee of the City Council has asked that all options for Latham Square be on the table at this meeting – a full closure to cars, a partial closure, or the restoration of two-way traffic (with a new traffic signal that would increase car and big-rig use of the street). Your emails and statements at the Public Works Committee meeting on Tuesday were instrumental in keeping the plaza option for Latham Square alive – but we need your help for a victory at the full Council.

In addition to coming to the City Council meeting on Tuesday, January 7, at 6pm, can you please share the petition in support of Latham Square Plaza with your friends, coworkers and neighbors? Show the level of support for the plaza by directing people to this page, LathamSquarePlaza.com, to sign the petition below.

And when you hang out in Uptown, please tell businesses that you support the Square. There is a lot of miscommunication about the economic effects and the support for the plaza among merchants, and hearing from customers matters more to entrepreneurs than hearing from the City.

Thank you for what you’ve already done – we have made good progress. With people power, we can win and have a pedestrian-friendly Latham Square.

We the undersigned urge the Oakland City Council to embrace the vision of a pedestrian-oriented downtown and create a car-free plaza at the entrance to Telegraph Avenue, Latham Square. A pedestrian plaza would:

When was the last time you sang karaoke or mocked up sculptures with architects on the street? Precisely why you want to visit the organizations and businesses creating parklets this Friday!

These “feed-the-meter” parklets are a vision of more accessible and better-designed neighborhoods.  Parklets permit a slower-paced absorption of our city’s corridors, mesh well with cyclist and walkers, and most importantly, encourage visitors to linger and share! 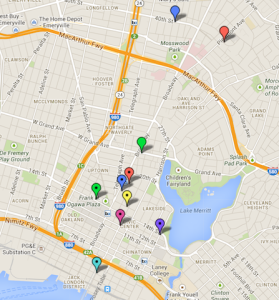 A one-hour bike tour will leave from PGA Design’s Parklet at 444 17th Street at noon.

Have you craved a more pleasant urban space in your day-to-day? Keep your eyes peeled on Friday, September 20th, as Oakland residents and businesses will transform parking strips into mini-parks.

This Park(ing) Day will be a vision of what Oakland can be if the City Council adopts a codification of a more permanent parklet application process. Celebrate this day of open-source, pop-up imagination to demonstrate what we desire from public space!

How and where? Parklets can be erected streetside in front of residences or commercial businesses. Oakland is our oyster: a parklet can be as simple as coins (for the meter), cordon (for safety) and chairs (for your guests)!

See who hosted last year’s Oakland parklets and explore some of the non-commercial concepts behind the day from San Francisco’s Rebar Group.

Want to take it to the streets in a constructive way? Host parklet or volunteer to help a host create a welcoming environment.

What could be more American than Kasper’s Hot Dogs? A great public space and biking place in Temescal!

Come visit us on July 7th at the Temescal Street Fair from 12 – 6 pm. We’ll be talking about our work advocating for improvements to Telegraph Ave with the East Bay Bicycle Coalition, which includes a pedestrian plaza demonstration at “Kasper’s Korner” at Shattuck and Telegraph.

Please see this nice description of the plaza demonstration.

There also we’ll share information on Park(ing) Day, which will create similar transformations of public roadway throughout the city into community parklet space this September 20th.

You may have heard of a new trial coming to fruition in Downtown Oakland this summer.  On the stand: an awkward section of roadway between Telegraph Ave, Broadway and 16th Street. The judge: your City and you!

The City of Oakland’s Public Works Agency will run a 6-month pilot period this year to evaluate the utility of this space, named Latham Square, as a public plaza. On February 23rd, the City held a community workshop to publicize the project and to gather neighborhood input for the initial design of the space.

Walk Oakland Bike Oakland is thoroughly excited about this win-win scenario: improve community space in the Downtown/Uptown corridor and limit the dangers posed by this confusing intersection.  While buses are vital to the downtown corridor, the Latham intersection real estate is dominated by cars. Nevertheless, traffic rerouting is not foreseen to have a significant impact and bus route accommodations will be relatively simple.

The workshop displayed a historical photographic walkthrough of the Latham Square space informed by the Cultural Heritage Survey. This reminded participants of possibilities for the setting. Streets full of horse-drawn buggies, streetcars and vintage automobiles have shifted to a car-centric design. The imagery reminded us of the centrality of different transit modes to public aesthetics. Luckily -perhaps because of it centrality transit, buildings, and sightline- Telegraph and Broadway is purported to be the most photographed intersection in East Bay history!

The event continued with current contextual update and open design charette. Members from the design firm Rebar Group (responsible for many of the first San Francisco Parklets) were on hand to describe their current design partnership with the City of Oakland. A cost effective approach is being considered: to create a stimulating yet low cost space which can more intensively altered later. To add a uniquely Oaktown flair, they look to reuse of surplus materials from City and Port storage yards. Similar projects in San Francisco include the Castro Commons and Guerrero Park.

Jamie Parks, Oakland’s Complete Streets Program Manager, explained that both the initial pilot design of the Plaza and the possible design improvements thereafter would heavily considered community input and actual use during the trial. The project occurs the as the City is studying the rest of Telegraph Ave in 2013, and eager to improve the corridor after the failure to pass the northern Bus Rapid Transit segment. WOBO and the East Bay Bike Coalition are collaborating, gathering a community input and advocating for an improved bikeway along Telegraph Avenue.

Workshop ideas floated creatively- visions included art by Oakland artists, food trucks, a cycle track, music, community performances.  Cyclists stopped to connect in what is now a difficult transit funnel, and imagined rolling along a bike lane from the Plaza to Berkeley. Many participants and passerby were struck by the enormous size of the intersection. Others commented on the unique view of from the middle of Telegraph, one never overtly afforded to residents otherwise. While the Fox Theater is frequently appreciated, folks noted that more leisure space at the base of the Cathedral and Rotunda buildings permitted the shine of their facades to be absorbed.

My favorite realization: imagining for the first time an Oakland where horses drank from the Latham fountain, dedicated 100 years ago.

Please let the City know what you imagine. For feedback, designs, and more, see the City’s website.