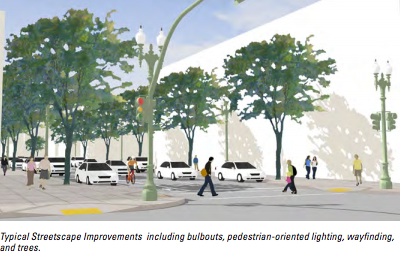 Have you seen the plans to improve community vibrancy, connectivity and safety in the Lake Merritt Station Area Plan? If not, check out the latest draft (July, 2012). It’s awesome, BUT there are a few problems. Even though:

The plan proposes delaying significant roadway improvements that can safely support increased foot and bicycle traffic, as well as improved auto traffic circulation; and some important details are going by the wayside. Fixes to the most egregious roadway segments in the area are being pushed out 6 to 10 years! The Bicycle Master Plan for improved street bicycling facilities through Chinatown is also threatened.

Want to know more about the Lake Merritt Station Area Plan? Visit the project website or emailChris@wobo.org to learn more about Walk Oakland Bike Oakland’s invovlement in the planning process.

I, [as a member of WOBO/ neighbor / visitor / local business], applaud the creative and visionary elements in the Lake Merritt Station Area Plan that can transform the area into a regional destination. BUT deferring street improvements on critical active pedestrian links and delaying the re-conversion of significant one-way roadway segments to two lanes will hinder the ability of Oakland residents and visitors to get to the area as well as to adjacent destinations.

I want the Lake Merritt, Eastlake and Chinatown and adjacent destination areas to thrive. But I want the areas to be safe and accessible to all users of the roadway.