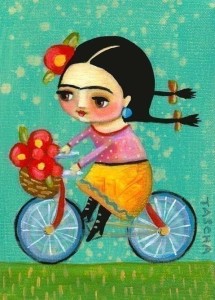 Seriously, we can’t believe we didn’t think of this earlier. But ladies have unique bicycling experiences that deserve customized attention to get them rolling comfortably, confidently, safely on two wheels.  WOBO is offering this inaugural bicycling skills workshop for ladies only.

What to bring: your own bicycle, helmet, and comfortable cloths appropriate for the weather

Location: meet up and end of the class will be at Fruitvale BART BikeStation (3301 E. 12th St)

What to expect: 30 minutes – bicycle safety check, 1 hour – visiting bicycle facilities on the roads and bicycle storage options, 1 hour – Road skills discussion and taking to the roadways with a League Certified Instructor from Bike East Bay

A couple of details before signing up:

1) You need to bring your own bicycle. Consider bringing your bicycle to a nearby bike shop for a safety check before the class. We will have a bike tech from Bay Area Bikes at the workshop to look things over. But you’ll want to have your bicycle in fairly good order as we WILL take to the roads.

3) You do not need to be speedy or a veteran bicyclist. We welcome all riders, as long as you’ve got basic handling skills.

4) Anyone younger than 14 must be accompanied by a responsible adult.

5) Come with an open heart and willingness to share some of your own bicycling experiences.

6) We ask for a $10 registration fee, but are open to donations on a sliding scale. All participants will receive a Walk Oakland! map.

[By registering for the Ride Like a Girl workshop, you agree to assume responsibility for your own safety and release Walk Oakland Bike Oakland from any liability WITH RESPECT TO ANY AND ALL INJURY, DISABILITY, DEATH, or loss or damage to person or property, WHETHER ARISING FROM THE NEGLIGENCE OF THE RELEASEES OR OTHERWISE, to the fullest extent permitted by law.]

Ready to Jump In?

Please check the EBBC website for announcments and details under “Safety”.

6-hour Road I course provides an opportunity to put into practice, what was learned in the Day 1 Street Skills class, including emergency maneuvers and riding in various traffic conditions, to test your knowledge of vehicular cycling skills. Bicycle required for Day Two.

Watch AC Transit’s new, two-minute video showing how easy it is to use their front-mounted bike racks and cargo bays (located on the big green AC Transit commuter buses).

Too much speed and too many vehicles are common complaints in many urban communities. To address these public concerns, many jurisdictions are tempted to adopt apparently easy solutions, such as lowering speed limits and/or installing Stop signs. However, without consistent and increased enforcement, speed limits lower than the 85th percentile are ineffective and not recommended. Installation of Stop signs without proper warrants is never recommended.

Traffic calming offers an alternative solution.
Traffic calming is defined by the Institute of Traffic Engineers as “the combination of mainly physical measures to reduce the negative effects of motor vehicle use, alter driver behavior, and improve conditions for non-motorized street users.”

The concept of traffic calming involves physical alterations to a road or street, which cause or invite motorists to decrease driving speed and pay increased attention to the driving task. Some results include reduced speeds and volumes, reduced collision severity, reduced need for extraordinary law enforcement, improved safety for pedestrians and bicyclists, and improved access for all modes of traffic.

The cost of traffic calming measures can vary from a few thousand dollars for closures, speed humps, and bulb-outs to $50,000 or more for extensive roundabout designs.

These steps would have an obvious effect on reducing traffic volume on a given road or street, but effects to adjacent routes must also be considered.
• Street closure (cul-de-sac)

These devices usually vary from 12 to 20 feet in length and consist of a vertical displacement in pavement surface or, with rumble strips, an audible and physical sensation to gain motorist attention.

These measures involve semicircular or longer extensions of curb or roadside landscaping to invite drivers to slow down. Narrowing of the street to permit easier pedestrian usage is also a potential benefit.

• Roundabouts and Traffic Circles
While generally not considered a traffic calming measure, roundabouts involve an intersectiondesign that can often improve operation, reduce crashes, and eliminate signal need. Extensive design recommendations are available for roundabouts in particular. Traffic circles are small islands placed in intersections. They are meant to reduce traffic speeds by requiring through vehicles to navigate around the circle.

Still other measures such as landscaping, fencing, pedestrian crossings, and lighting can have beneficial effects in slowing traffic and providing a safer environment for all roadway users.

Content from this page courtesy of the Iowa Traffic Control Devices and Pavement Markings: A Manual for Cities and Counties

Do you feel safe crossing the street near where you live or work? Have you seen or been part of a close call at a poorly lit, under-signed or otherwise unsafe intersection? In 2008, The Contra Costa Times created this map to highlight dangerous intersections around the East Bay. You can add additional dangerous intersections here, and they’ll link to them as part of efforts to improve local transportation awareness. This will also help inform future Walk Oakland Bike Oakland campaigns.